Well, just as the title suggests this are a bunch of random pictures I took for one reason or another. Quite a few where for articles that I never got around to write. Instead I decided to dump them all here in this post. It’s better than them gathering digital dust in my hard drive for sure. So, lets begin I will give you a short description about these pictures.

The first two pictures are experimenting with my lovely digital camera. My friend who likes to use and fool around with it showed that I could take long exposure shoots with it. These two are examples of that. Can’t remember how long it was though, but at least I can tell you there is a yellow tint because of the light bulbs I have in my room.

Hopefully this guy doesn’t need an introduction. If he does, I will feel old. I picked him up the other day at Wal-Mart. Nostalgia made me got it, not to shabby for being an American today. It’s made by Bandai so I guess that helped.

I took the megazord to school to show it to my buddies and happened to have a figma with me like I always do. Yuki was my favorite for a while, and I decided she looked cool with light sabers. I want to find Mace Windu, I think Yuki would look lovely with purple light sabers. 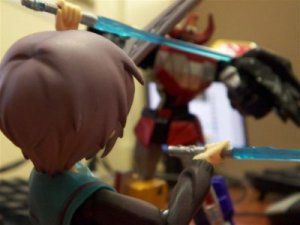 Yuki was having a little trouble, the megazord to me kinda qualifies as a super robot type mecha to me. This is when Yuki decided to stop playing around.

She grew to megazord size, and wiped out a nice rifle, anybody recognize it? The remains of the megazord are to gruesome to show…

Next we have black haired Shana, when I saw her in stock in Play-Asia I grabbed her without a second thought. Flame Haze Shana is nice, I’ll get her in my next batch of figmas. I think though she is cuter with the black hair.

These two pictures are from a trip to IHOP where she joined me for a nice breakfast mid afternoon. Do you comrades have them in your neighborhood? 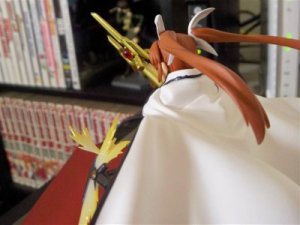 I really like this picture, I think I was able to capture Nanoha’s White Devil side. This was inspired by the Nanoha Betrayers doujinshi. Amazing work, go look it up get the translated version or the original Japanese even. Recognize the stuff in the background?

The next batch were going to be part of a 4-koma and what not. I got inspired by the SOS brigade vs White Devil and the Saber Lily ones. Too bad once finished and the other has yet to return. 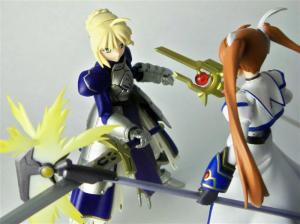 In case you are wondering why Nanoha is dual wielding Raising Heart and Bradiche, it has to do with a picture I got from Gelbooru with her dual wielding both devices. I though Nanoha looked really amazing so I though I would recreate that. 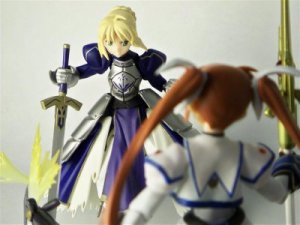 Does it look like Saber is losing? My idea was having Saber be nearly defeated then show some of the battle and finish with a climatic comeback. No idea who was going to be victorious, since I really like both girls.

I again was playing with long time exposure. So much detail in the kimono I wish my camera would pick up. Whenever I get a better camera, I will sure redo my Shiki and Kos-Mos photo shoots.

Can you tell, this time the shoots where taken during daylight. 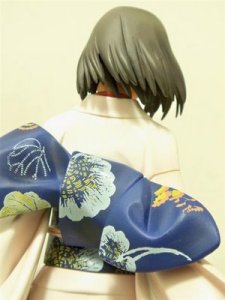 I also played around with Shana, I really need to do a photo shoot for her too someday. I wish I had a beach, would make the perfect backdrop for Shana and Kos-Mos.

Remember that picture of the balancing Harhi and Yuki? I tried to do something like that when I got bored at school one day. 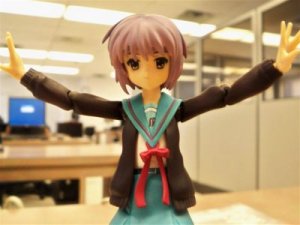 She was quick to recover though. No figmas where injured in this act.

I love this picture, they look so cute. I saw this pose posted by a comrade, just had to copy him a bit.

I wasn’t a big fan of Kagami at first, more of a Konata guy. Then I got the figma, and started carrying her around. She became and instant favorite.

Kagamin is been a little dere here, don’t peek!

I got Yuki once more, couldn’t resist getting her with the guitar.

This is when I first got here. She had a nice duet with everybody’s favorite vocaloid. I should get more vocaloids. The Chibi Miku 4-koma made me a fan of Rin.

I got bored wainting for my team in the library. I asked Yuki to play for me a tune while I waited. Ahh…too bad you can’t see 3D Yuki in the screen too well. 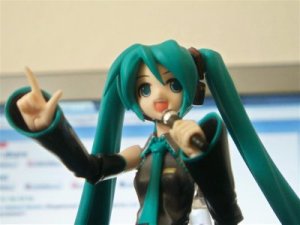 There you have it, a bunch of unrelated pictures. Some are from last year even newest ones are froma month or two ago. Kinda wish I had written those articles that where supposed to go with them and the others from their sets.

Please, leave your comments about the pictures, or anything in particular. I you are bored enough, go read the other few articles.

See ya soon, hopefully I will write a gaming article I been itching to write for a while. So hard deciding on what game to write about.

I like girls, games, Japanese media and Touhou. I take pictures of things I like. Also have a blog. http://miettechan.com/
View all posts by Miette-chan →
This entry was posted in Alter, figma, Figures, Good Smile Company, Kotobukiya, Max Factory. Bookmark the permalink.