I haven’t really played any visual novels from start to finish. I started playing one that was an eroge last year but never finished. I started playing Chaos Head but stopped because of a game crashing, save file killing bug that has been fixed now. However, I finally got to play another lovely Nitro Plus visual novel that completely caught my interest; Saya no Uta or Saya’s song. 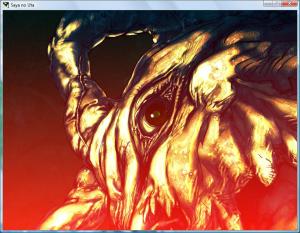 This being a Nitro Plus work means the story is not something you find in the tear jerkers from Key. In this visual novel our protagonist is the only survivor of an accident which has left him with a warped view of the world. To him what you see above is a human, now he sees humans as monstrous creatures, the world is one filled with horrible sights, smells, and sounds.

Among this madness he finds a girl Saya, that to him appears as nothing short of beautiful. From then on the story follows the story of how our protagonist looses his humanity while Saya gains hers.

I must say that I thoroughly enjoyed this visual novel. There were some points where the tension the anxiety and fear I felt when I first watched Higurashi resurfaced again. I feeling that I have been wanting to experience again. One thing that I felt helped this was the soundtrack, I specially liked the titular track, Saya’s song.

I forgot to mention, but this visual novel does included some ecchi bits. I’m glad that those were included with relevance to the actual plot of the game.

Although on the short side with only 3 endings, the good, the bad and true endings I must recommend this game. If you like a nice horror, with a little Sci-Fi, and a good romance you can’t go wrong with this visual novel.

I highly doubt it, but I would really like this to be animated.

I like girls, games, Japanese media and Touhou. I take pictures of things I like. Also have a blog. http://miettechan.com/
View all posts by Miette-chan →
This entry was posted in PC, Video Games. Bookmark the permalink.